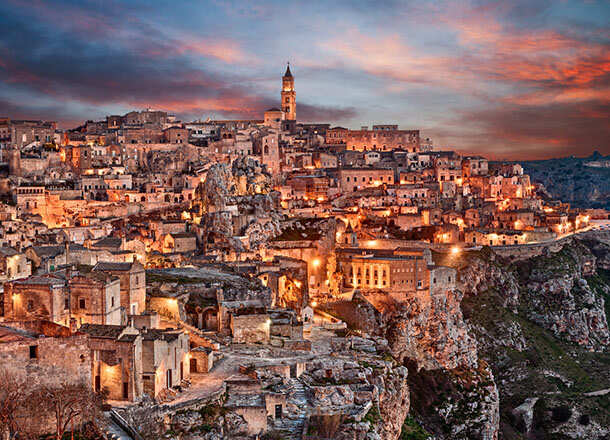 Apulia, the charm of a land where time has stood still

The Kalidria Hotel & Thalasso SPA is in Castellaneta Marina, in Apulia, one of the richest regions in the Italian “Mezzogiorno” in terms of natural beauty, culture, history, art and tradition.

Apulia is the land of sun and hospitality in the heart of the Mediterranean. Centuries of history and enchanting landscapes are just some of the wonders that make this place unique and from where you can take back unforgettable experiences.

SUBSCRIBE TO OUR NEWS TO RECEIVE NEWS AND OFFERS!

Matera, the “City of Stones” 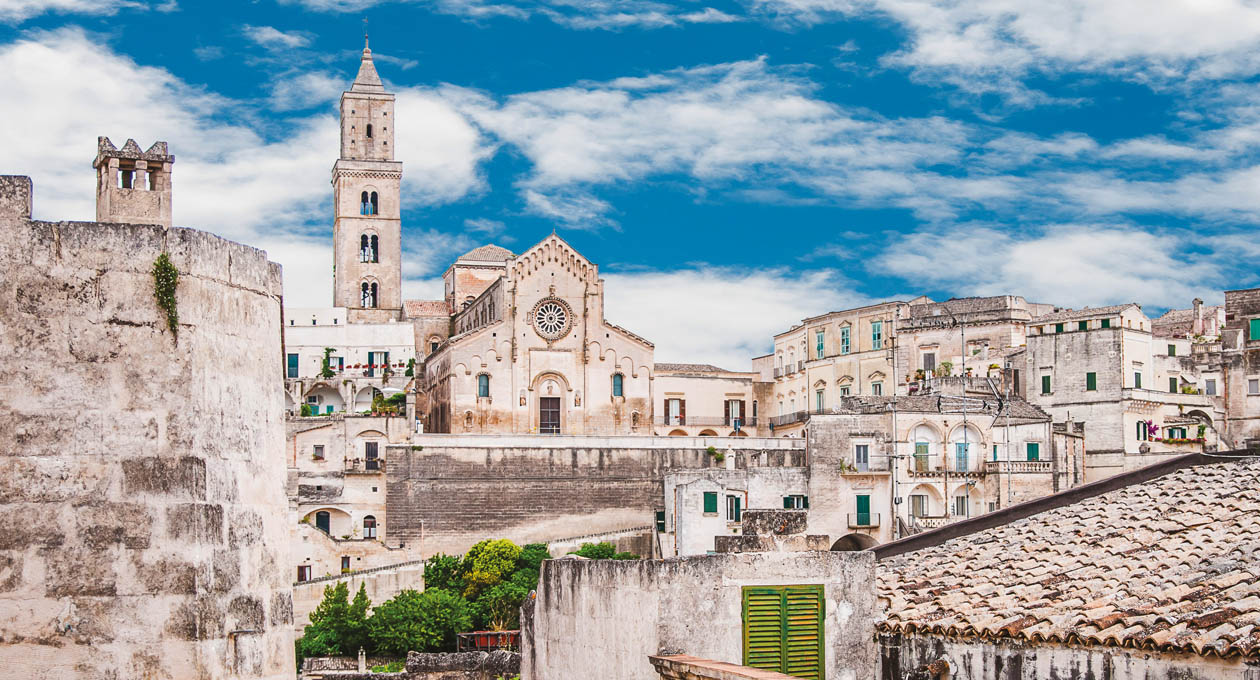 50 km away - the contrast between the ancient and the modern, between tradition and innovation, are embodied in the incomparable landscape we find in the city of Matera. This spectacular Lucan city, a World Heritage Site, has been protected since 1993 by UNESCO. Known as the “City of Stones” or the Underground City, Matera is amongst the ten most ancient inhabited cities in the world, whose settlement dates back to about 10,000 years ago. The uniqueness of this rocky landscape combined with the sensitivity with which its cultural identity has been restored, have given increased importance to the “Sassi” which today, as well as hosting museums, provides an enchanting backdrop for prestigious cultural exhibitions of both national and international interest, all of which have earned Matera the title of “European Capital of Culture 2019”.

90 km away - Castel del Monte is a fortress dating back to the 13th century. Commissioned by Frederick II of Sweden, it is considered one of the most well-known tourist destinations in Apulia. An imposing and extremely remarkable structure, Castel del Monte has an original octagonal shape - a recurrent theme in both the layout of the building and the courtyard and in various architectonic elements. The shape and the location, have been studied in relation to the direction in which the shade falls during the days of solstice and equinox. The evocative emphasis of some decorative elements are intrinsic to a symbology which unites hints of different cultures.

Since 1996, Castel del Monte has been protected by UNESCO as a World Heritage Site. As stated in the organisation’s rationale: “A unique piece of military and medieval architecture, Castel del Monte is a successful combination of elements from classical antiquity, the Islamic East, Northern Europe and Cistercian Gothic”. 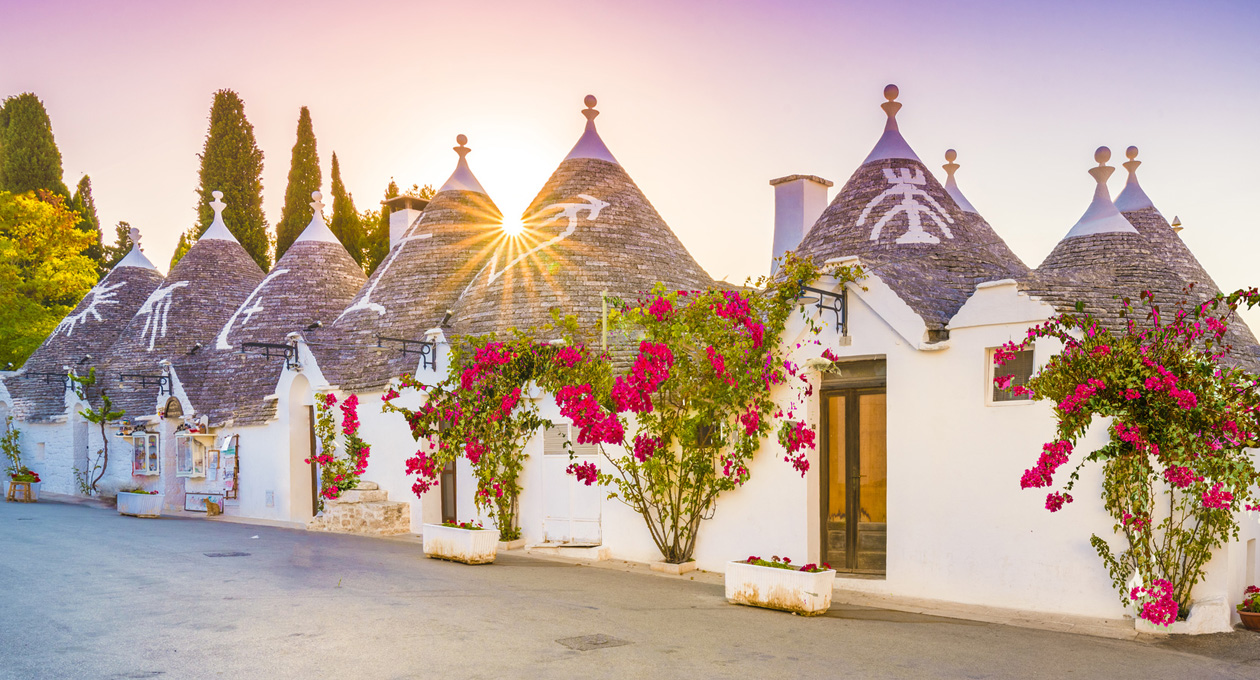 60 Km away - The contrast between modernity and tradition, a distinctive feature of the regions in Southern Italy, is an essential component of Apulia’s charm, where time seems to have stood still. Such is the case where Alberobello is concerned. An agglomeration, unique in the world, with its 1,500 Trulli, has been declared by UNESCO a World Heritage Site. The Old Town consists exclusively of these conically-shaped dry-stone constructions in limestone from the high plain of the Murge.

The Trulli, found mainly in the Itria Valley, between the provinces of Bari and Brindisi, have prehistoric origins, modelled on the tombs in Thòlos from the late Bronze Age. This type of construction is found in numerous areas of Mediterranean Europe and the Near East.

However, The Apulian Trulli – still lived in today – when compared to other examples of domed constructions, are as much characterised by their continuity of use as for the fact that, perhaps, they are unique examples of prehistoric constructions still in use today.

The beauty of the White Cities, rich in views, panoramas and monuments 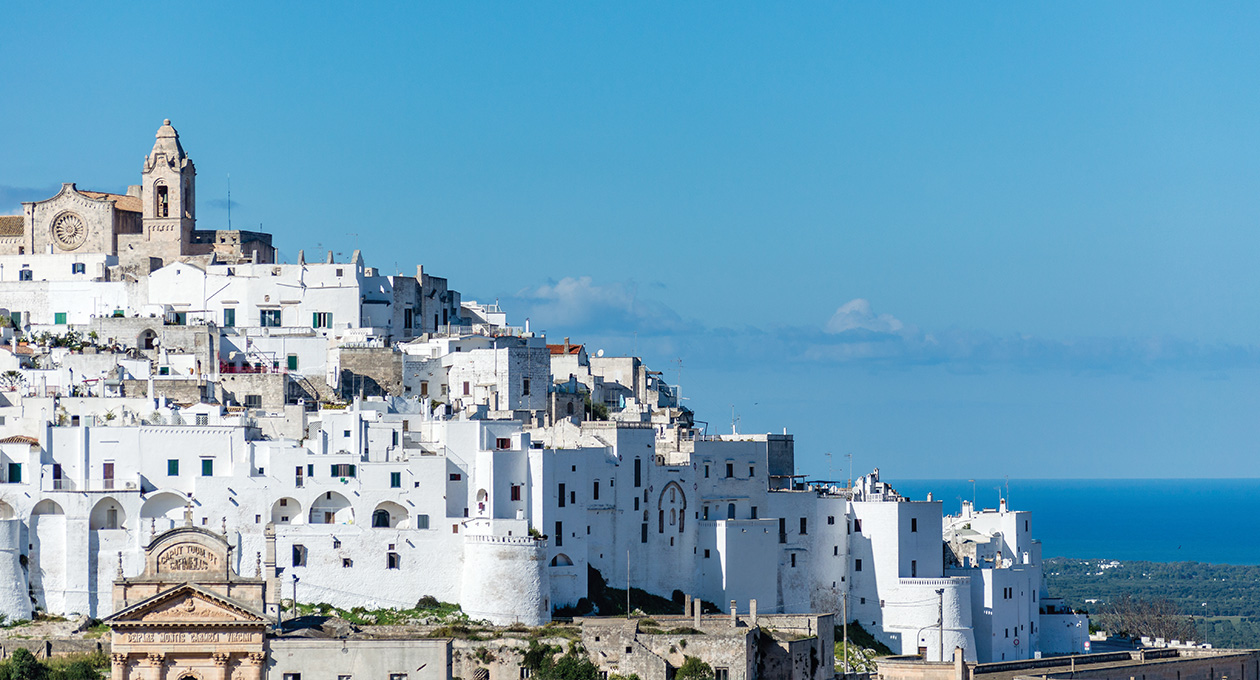 Ostuni, the White City, in the province of Brindisi, like a nativity scene which is set up year after year, emerges with glowing white walls from a panorama of sun-baked soil, olive trees and dry stone walls. Located between the Itria Valley and High Salento, about 70 km from the Kalidria, Ostuni is amongst the most renowned tourist destinations in Apulia, not only for the cleanliness of its coastal waters and the quality of its facilities, which have earned it the Blue Flag and the Legambiente Five Sails, but also because of the numerous historical-cultural treasures it guards.

Martina Franca, situated on the hills to the east of the Murge, in the heart of the Itria Valley, is amongst the most populated villages in the province of Taranto. It is surrounded by a naturalistic landscape of great interest, and is less than 50 km away from the Kalidria. The ancient hamlet is a fascinating combination of palaces in the Baroque style and characteristic little white houses, which are tiered upon the hillside, winding alleyways and majestic churches which house masterpieces of art and sculpture.

Locorotondo: a small village consisting of white houses built next to each other in the shape of a circle in the heart of the Itria Valley, just as it appeared originally in about 1000 A.D., and even today, the characteristic shape of the Old Town in Locorotondo remains unchanged. The architecture of the village is enriched by numerous church bell-towers in testimony of the deep religiosity, in which the culture and history of this village is steeped, about 50 km away from the Kalidria.

The Itria Valley (Valle d’Itria): The landscape in the Itria Valley is dominated by vineyards and olive groves, low dry-stone walls and red soil, punctuated by the white of the Trulli which, every now and again, appear in the countryside. The panorama is interrupted by the appearance of villages considered amongst the most beautiful villages in Italy, such as Alberobello, a Unesco Heritage Site, or the wonderful villages of Locorotondo, Martina Franca, Cisternino or the magnificent Ostuni. Apulia offers unique scenery, with its hills covered in olive groves, sloping down towards the blue of the sea. Its villages are steeped in history and tradition, crossed by narrow alleyways surrounded by white houses. In small shaded squares we find ancient artisan workshops and restaurants which hand down Apulian flavours and aromas.

The Capital of Apulian Baroque 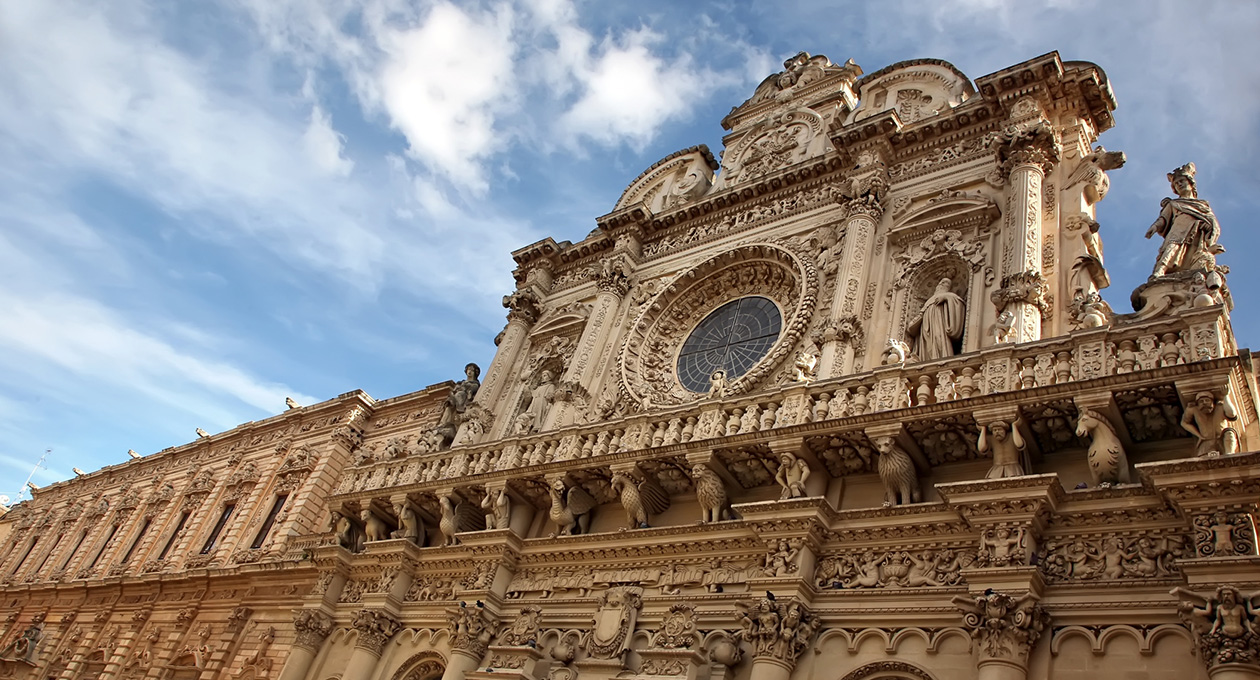 100 km away – The city of Lecce, in the heart of the Salento peninsular, is characterised by the splendour of the Baroque style seen in its churches, palaces and architectonic particulars, which have earned it the nickname of “Florence of the South”. The wide diffusion and the richness of the local Baroque have been facilitated by the peculiar friability of Leccese stone, suitable for the creation of much sought-after decorations, such as those that embellish the façade of the Basilica of Santa Croce (Holy Cross) and the Seminary’s Palace, or the extraordinary Piazza del Duomo (Cathedral Square) with the Maria Santissima Assunta Cathedral.

Salento is a land of unimaginable beauty, lapped to the east by the Adriatic Sea, which gives it its rocky and jagged coastline, and to the west by the Ionian Sea, which gives it a gentle and sandy coastline. The union of the two Seas can be seen from its last spur, Santa Maria di Leuca. The beauty of the sea and the wide choice of coastal scenery are just one of the features denoting the richness of Southern Apulia, a place that few have known how to hand down and enhance its own history and its own cultural identity. The charm of its rural and coastal landscapes, its art, its traditional cuisine and its hospitality characterise this territory. Many are the manifestations that celebrate Salento’s musical tradition, in particular, the Night of the “Taranta”. The ancient rhythms of the Salentine “Pizzica” (Dance), relieved of their traditional, anthropological connotations, have welcomed outside influences and modern suggestions, so much so, that, in recent years, they have generated a musical phenomenon with its own characteristics whilst remaining firmly anchored in the Salentine territory. 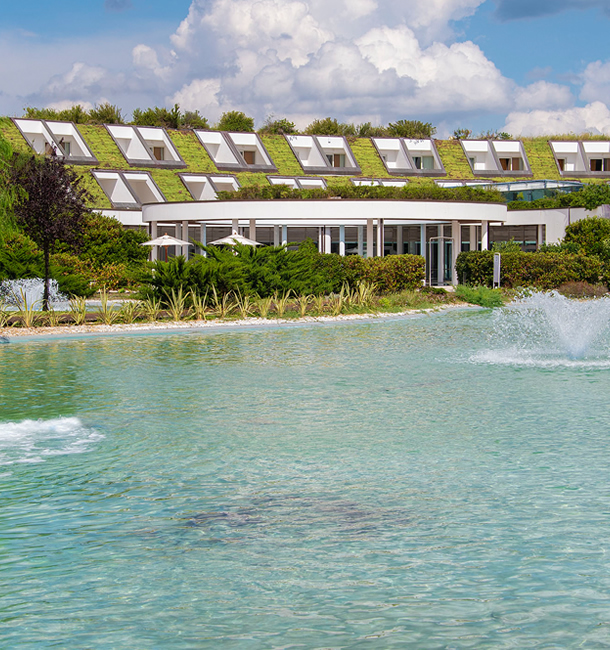 Fill in the form below to check availability, calculate and receive the quote in a few seconds.

Please choose your language
sign up and stay updated

Subscribe to be always updated on Kalidria news and offers,